On another boat, yet another night time float and again I opted for the economy seating. I have a seat but it’s much more comfortable to sleep out in the byways or in the restaurants booths. It is allowed as long as you can snag them first. So since I didn’t snag them first,  I wandered for a few hours, had a few beers and passed out around 1am, like  a hobo on the outside decks.

Getting off the boat I was groggy and little beat down, but riding the bike off the boat was easy. With the exception of rain!

Its when I pulled up to the customs agent that things got tense. It’s 6am and I had about 4 hours of interrupted sleep. Sleeping out on the deck of the ferry seemed like a good idea at the time, but I quickly realized how sleepy I was.

This is what it looks like when waiting for customs! 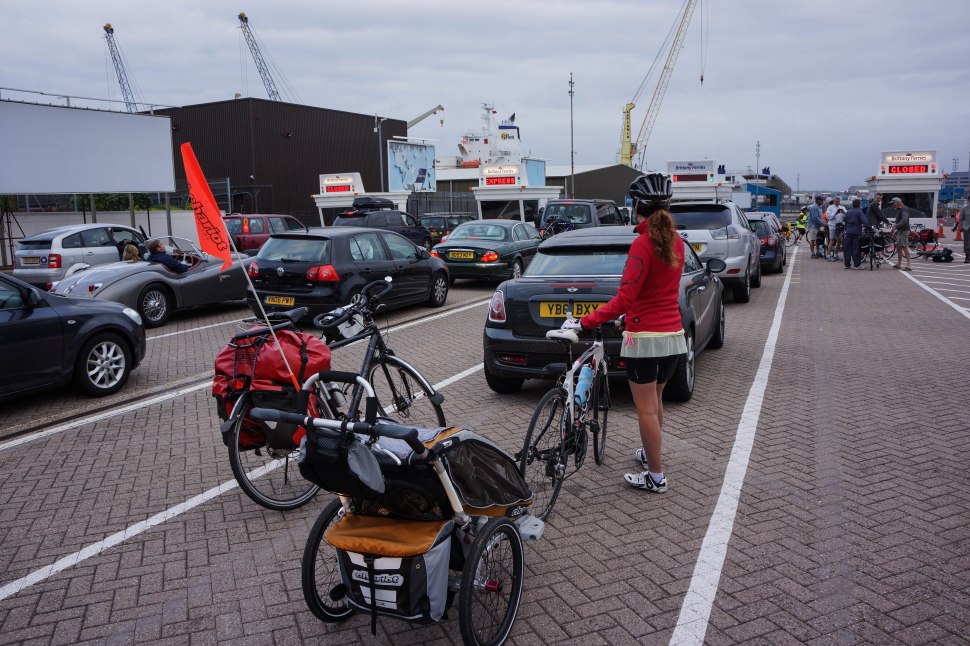 As I pulled up to the customs window on the bike, the attendant, with rosy red cheeks, and the look of a pissed off teenager who no longer had access to their cellphone, began to unload 51 questions.

Where are you from? What are you doing here? Valid questions!

Then he began to ask me what I do for living and how can I afford this trip? How many employees do I have? What did you make last year?

OK! I can see where this is going, but my slow response to these questions had him asking me more.

How are you going to leave this place? I asked,” what place? He says what do you mean what place? The Island!? Don’t get smart he says.

He says, “The Island, and Europe!” His tone is extremely condescending. Or was he trying to be funny? So I chuckled because I couldn’t tell, but I said, “I don’t know!” He says, Don’t laugh this is serious…..“How come you don’t know?”

I appeased his demand gave him a date and then he says, “Are you being honest with me?” HOLY HELL!! “No I’m not, because the honest answer is I don’t know the exact date!!!

Now at this point he’s already asked me about how many brothers and sisters I have too. There are at least a dozen cars behind me, and I’m thinking every time he asks me a question he’s trying to catch me slip, and “I don’t know” is not an answer for him.

He’s getting irritated and so am I. It’s 6am and it’s a show down! I’ve traveled enough to not antagonize those who can deny you entry into a country, but this guy is deliberately asking me leading and vague questions and he wants me to descriptive at 6AM!? Am I the one being unreasonable? Maybe it’s too early 🙂

After literally what seemed like forever, but turned out to be at least 10 minutes, I think we agreed to disagree. He begrudgingly stamped my passport and  said “bugger off!” YEP GOOD MORNING ENGLAND, so glad to be back to riding!

I tried to get coffee somewhere but it was too early so I didn’t stick around Portsmouth but here it is. 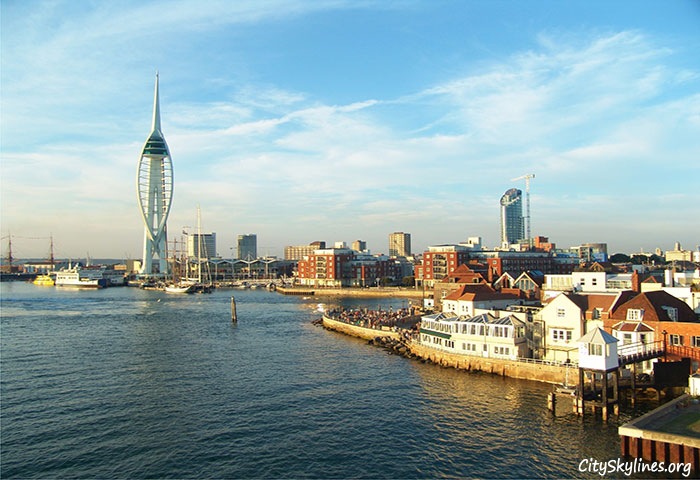 Did I mention it was raining hard and I  mean HARD! My first real rain turned out to be at 6am entering into jolly ol England, with an attendant with a stick up his ass!

Never mind then… on to London!!!!! My friend Craig told me to go to the  ‘brewery inn’ where he used to work. So I looked it up and it was on the way to London in Ashtead. 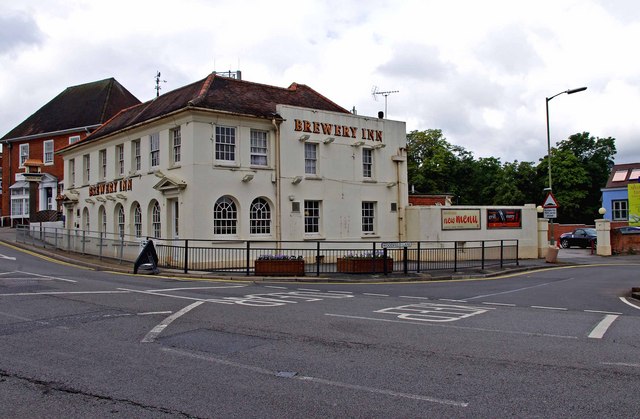 Since it was raining it was nice to get off the bike and into warm dry pub. I was drenched for the first time and though the bike handled beautifully, I was traveling slower. I had no uneasy feelings, besides my helmets windshield holding too much water. I was constantly wiping it off.  The roads were generally nice and clean with almost no potholes. It puts your mind at ease knowing you do not have to worry about the roads imperfections. 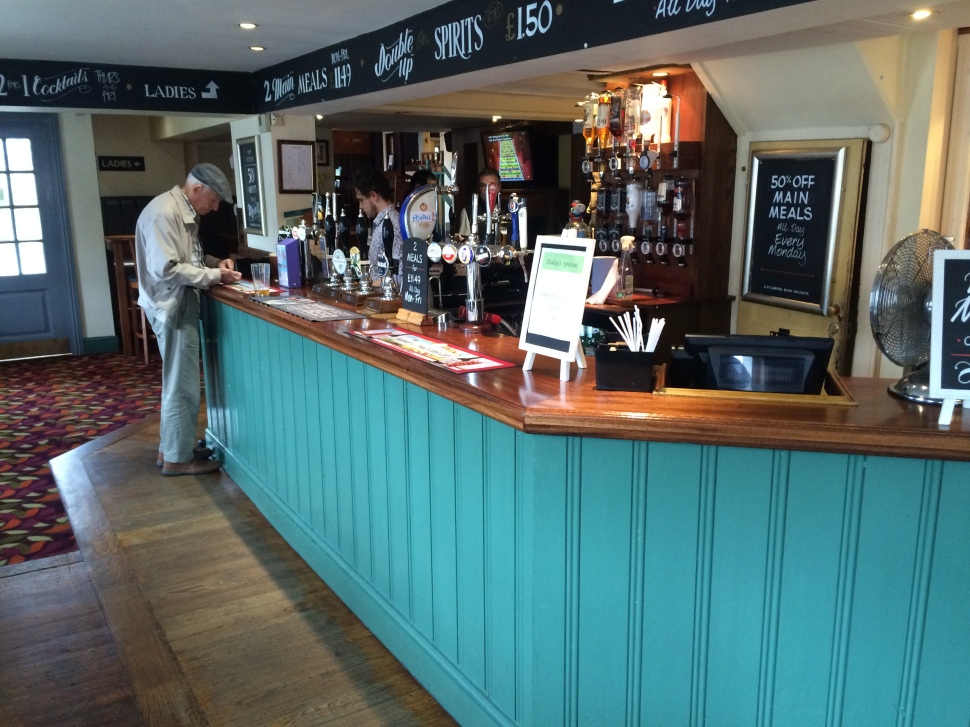 These folks above were nice as I enjoyed some fish and chips and met an elderly man who has been living there for 30+ years. One of the coolest things to me is to meet someone who has seen so much in such a small town. He talked about the changes, and how he also lived off the grid once in south Africa.  From France to England peoples stories here in Europe have fascinated me.

After  2 hours of hanging out and chatting it up with locals. Which, I was relieved to speak English again. I headed out to London for only an hour ride. Or so I thought!

It was still raining and the traffic getting in, was the worst since Paris. The only difference, in England, is most stay in their lanes. I could feel the uneasiness of  drivers. It felt like the states, where everyone is in a hurry and not willing to give the right of way. No matter!! I worked my way through it!

I found my  my air bnb in south of London, “tooting” that is….. after speaking with  my cousins Henric and Kaisa back home about which area I should stay, I ended up taking none of there advice! LOL! It was more of a mishap, I didn’t listen to there advice and I ended up pretty far away from sight seeing and the “GOOD” neighborhoods.

My hosts Lyndsay and Mark were a nice couple, but they had no chance to hangout as they had a wedding to attend to all weekend. So they left me with the key and I never saw them again.

Enter Big Ben pic here——- Enter all the pics I took with my camera but my memory card broke. Really just touristy stuff. I pretty much jammed through London walking everywhere and of course taking the subway everywhere. I left the camel covered up near the air bnb, no riding!

These two pictures were on my phone in front of an old castle and me in front of the Buckingham palace. So there is that!

My friends Craig and Mickey told me to go to the pub they first met some 20 years ago, and 4 kids later :). You never know where you’ll end up meeting the “one!”

I walked into a pub and saw the TKD summer olympics on the “telly!” After not training or seeing martial arts in the last couple months, and more then 25 years straight, it was quite interesting to see it on the television, randomly!  This is the longest I’ve been away from my business and training!

London was cool but I had only two days there. I was more excited to meet my friend Craig in Wales to get the Rugby tournament started.