I left Hamburg experiencing a good nights rest on the Elbe river. I’m starting to feel an internal fight going on! My destination, Copenhagen.

Part of me wants to stay and explore and part of me is excited to get to Finland and see my cousins. There is also another side of me that is feeling anxious to get back home to my family at home and studio family. How many of you, feel like you want to experience it all? There is internal struggle of happiness, sadness, and anxiousness with my impatience.

Riding a motorcycle and traveling will make you feel it all in a short amount of time. I think those feelings can be highlighted when you travel by yourself. Your left to think, move and act on your own, and without the distraction of a travel partner you can find yourself, battling yourself.

Back on the road I was jamming but I also was stopping occasionally. I’ve been developing a casual slower European nature and I wasn’t going to get to Copenhagen like I planned.

The road up to Denmark was pretty straight. Farm land with those big solar powered windmills. I made it to Kolding, Denmark and decided to stop to grab a bite to eat. A charming looking town.

I chose a local bar because….well thats where you meet the locals! Sure enough they were locals, and they seemed quite shocked to see me in there.

Picture a smoke filled room, and handful of “Developed/Seasoned” Folk!

One guy looked like someone from the village people. Wearing all leather and about 80 something years old. Another older lady sitting next to him with leopard skin shirt and badly bleached red hair. Straight out of the 50’s era gone bad!

On the other side of the bar an older lady with an oxygen tank and cigarette in mouth.

Now instead of turning around and walking out, I sat down like I’d been there before. I’m not sure why I felt the need to show them I wasn’t bothered by the smoke, but I wanted to be respectful. I don’t think they thought anything was wrong, and why should they? They all seemed very happy. Laughing and joking with each other. Turns out there was no food, so I ordered a beer with a bag of chips and then tried to communicate. Thinking what language am I supposed to speak? I did no research on Denmark. It was kind of an afterthought. No one spoke English, so that didn’t work out!

After the beer I made the move to get out, so my lungs could recover. I picked a campsite in Nyborg. A small town that connected to the island where Copenhagen is. I had a cool beachside view of the baltic sea.

The suspension bridge, officially known as the East Bridge, has the world’s third longest main span (1.6 km), and the longest outside of Asia. It was designed by the Danishengineering firms COWI and Ramboll. 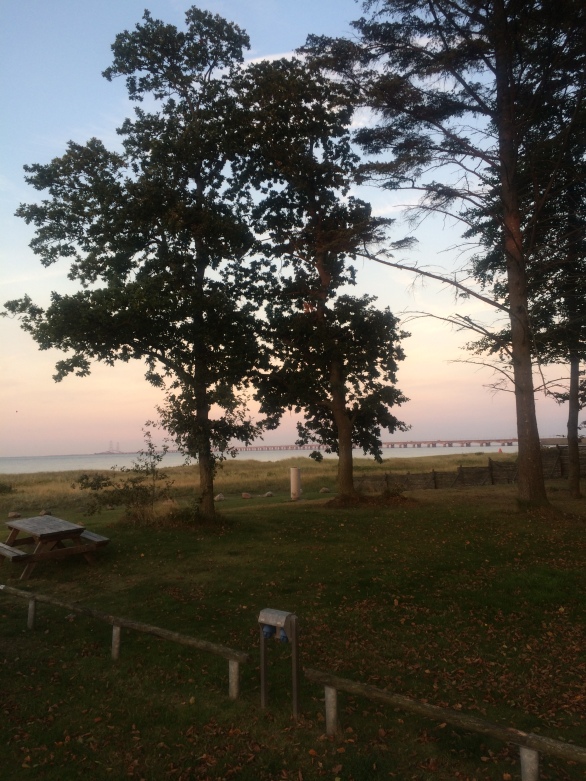 There was one other couple with their new born baby there. The husband took a 6 month leave of absence so they could travel in their car with a roof top tent. The tent was smaller then mine and they were traveling with a 5 month old. It seemed crazy to me. Would anyone do this in the states? I thought…I would! What an amazing experience for them. One thing that stood out was they said they were able to create a bond between them and the baby without any distractions from family or friends. Selfish? Or exactly the type of thing a family should do?

The next morning I took off towards Copenhagen with water views galore. Otherwise it was pretty much a straight highway. I found a campsite on the beach but it turns out it was full. Planning the night before has its disadvantages. So I was directed to a campsite about 20 min. outside of Copenhagen. Not particular exciting in anyway but I wasn’t quite feeling like staying in the city. I wanted to keep this camping thing going. I was developing a good flow with it, and the rooms for air bnb and hotels were quite expensive.

The next morning I hung out in Copenhagen for the day. Although I’m on a slight time crunch, I came all this way I had to spend one day at least. I found, of course, some cool pubs and a brewery. The brewery was called War pigs!

Great BBQ and beer if you ever get a chance to get there. I was also shocked to find a beer from ‘Anderson valley’ in the pub next to War pigs.

For those that don’t know its a small coastal brewery in northern California. It was just a few bottles in a very small fridge, but completely random in my opinion for it be there.

I rode my motorcycle into town with the plans to stay there but ended up heading back to the campsite. I didn’t see anything specific, i Just cruised through the town and enjoyed people watching. I met quite a few americans who were working in Copenhagen.

I woke up pretty refreshed and ready to ride again. This time I’d be crossing Into Sweden. The rides are a lot cooler then what I’ve been used to over the last couple months. It was foggy in the morning and the sun popped up a little later as I rode through the city of Copenhagen. A welcoming warming of my bones. My next destination Stockholm!

I crossed over the bridge that goes under water. It connects Denmark to Sweden.  I think it cost around billion dollars to build. I figured that out after it cost 20 something dollars to cross it.

The Øresund Bridge is the longest combined road and rail bridge in Europe and connects two major metropolitan areas: Copenhagen, the Danish capital city, and the Swedish city of Malmö.

There is no way I’m making it Stockholm with a 9 hour route. 9 Hours can easily turn into 12 on a motorcycle.  Unless I want to ride through the night. What fun is that? I prefer to get into town by daylight. Since I rode with no plans or specific destination for the night. I decided this would be the perfect time to camp randomly. Where would I stay?

I thought the best thing would be to find a small town. Preferably one with a mcdolnalds, and then head off from there into the wilderness. McDonalds is sure fire way for me to get Wifi. Unfortunately I’m tempted to get food there as well.

So along the way the sun was going down and I knew I had to find a place, and it just so happens these signs with witches kept popping up. I know its says welcome, but that didn’t re-assure me I was heading into a good spot.

It turns our Oskarshamn, Sweden has a port and there is an island “Blå Jungfrun” that has history of witchcraft. If I told you it didn’t go through my mind sleeping out in the middle of nowhere i’d be lying. Blair Witch Anyone?!

After riding around for about a half hour and taking some dirt roads, I found a spot on a lake where I could hide my bike and myself. I know it’s legal to camp anywhere here but it still felt funny. Who’s property is this?

The picture above is the only picture I have since my memory card broke. I’m bummed because this spot was so peaceful, and quite nostalgic for me considering it was one of my first times camping in a “non-campsite”. Unless you count the time I slept on the beach in sardina!

There was a slight creepiness with the fog and weird noises at night but i think it was just those witch signs playing with my head.

I woke up headed to the McDonalds in Oskarshamn and downloaded my next navigation map. I took some beautiful roads along the coast and stopped to enjoy the scenery where I could. It took me another 6 hours to get Stockholm and I found a campsite just outside of the city limits.

It was pretty close to the city and was priced right. I’m trying to stretch my dollar since I’ve mostly gone above my $50 a day average budget on this trip.

I ended up meeting some fine British folk gathered around a table, doing what most of us do. Hangout and bullshit with each other, and I ended up going out with them that night to a local bar.

It started out fine and then the bar quickly became a melting pot of cultures puffing their chest and flexing there muscles at each other. Refugees, Finnish gypsies, Polish all conjuring up ways to manipulate each other into taking control of the environment. It was quite interesting, entertaining and eye opening. Sweden has almost always had an open border policy but it was interesting to see how that effects the pace and the social environment.

All that aside I enjoyed everyones company and ended up spending a sight seeing day in old town Stockholm.

Two nights in Stockholm and the morning I was leaving, I felt a rush of  excitement to be this close to Finland. I’ve ridden a little over 10,000 miles so far and my only thought was stay focused! You got this!