Barcelona was hot, exciting and the neighborhood grew on me. There is plenty to do there and the food options were amazing. I’m excited to explore the rest of Spain as my next destination is Valenica.

(The view from the room)

I got the camel from the parking garage and brought it closer to the flat. Packing and un-packing logistics change with every location. 6 flights of stairs to do on this one. Do I try to bring it all in one trip, fumbling and stumbling along the way? Or do I sweat my ass off going up multiple times. Checking and re-checking to make sure I didn’t drop anything or leave anything.

It takes me a couple hours to load, pack up and leave. Most mornings now I’m drenched before I do. The bike is the only cooling sanctuary I have and once i’m on it all the chaos is behind me. Just the unknown on the open road.

My navigation is working now, I went once again to the apple store and had them reset it. I toyed with the idea of getting a new one. Apple has the exchange program. Its a lot more money than I want to or need to spend. Im just hoping it doesn’t black out on me
again.

The Camel is running great, still nothing to note as of yet, and since I’m covering a much longer distances again like in the states, I’m taking the highway for the second or third time in Europe. I’ve had the luxury of backroad riding most of the way but I’d prefer not being out in the heat for the next 9 hours navigating through what is mostly desert. Mixed in with your occasional rolling hills of vineyards.

Along the way I kept thinking of how most of these countries have had roman influence and before that a middle eastern influence. I’m not just riding through spain.

Fuel is still not a problem gas stations are just about everywhere and Spain has them in areas that are at convenient. I stopped for lunch along the highway to get gas and food. The restaurant looked closed but as I walk in you can tell it was a place to cool off with all the patrons in it. I’m better with spanish but I still struggle to understand what I order. Or how to order. Instead of asking or trying to communicate I just point to something and hopes it’s good. Well…… It was good but I got rabbit with 3 sides and whole bottle of wine. Ha! what the hell i cant drink this! I tried to tell him to take it back but he said I can have a glass and leave the rest. The bottle was $3.99 and i gave it to the table next to me.

I made it into valencia and to the next air bnb. This one is outside city limits and right near the beach. Parking the camel and the ease of getting the gear off the bike and into the room was a must for the next booking.

You always wonder, or at least I do what a place looks like when looking at the map. I’ve always been attached to the mystery, and curious about other cultures. I know what my days are like, but what about theirs? In the case of my host Isabel she is a teacher they take a month or so off in summer, and if I got it right  Mario the husband does landscaping! I think they make pretty good money renting out their 3 rooms for air bnb.

First thing I did was check out the downtown area and Valencia was a lot bigger then I thought. It’s known for its paella, so I kept looking for that.

Walking around one of the first things I noticed was how clean everything looked and the fact that there is a park that runs through the middle of the city. It’s a great place to hangout or just to use as place to run or bike.

There is plenty to do for families here and the city has a great mixture of new and old.  A sea park and this amazing museum (City of arts and sciences)

I spent my time in town exploring the buildings but much less then the other cities I’ve been too. I’m a little burnt out on the old churches and quite frankly some of the monuments as a tourist can drag you down. Pay this, go here, stand there. There are some amazing sites but do you really have to pay another 5 euro to walk into another Church?

I spent my nights wandering the town as during the day it was too hot. My hosts were very gracious but the house was big enough I barely saw them.

If you study the maps of city you can’t quite tell how big or small they really are until you get there. If you look at this map, 5 was where I hung out. Around the city center, and the beach on the right was where I was heading after a nights out.

I thought when I booked the air bnb I was close to the city center so one night as I walked home I was thinking it was close. Unfortunately at  2am there were a few cabs out and no people. As I walked I was looking for food and thinking I could do it. I kept walking, no food, and almost no cabs. It turned out to be a good 6 mile walk home :(! Made it in by 3ish.  Still on the upside it was great way to see the whole city.

The next couple days  were spent in town or at the beach.

Valencia’s beaches have some of the softest sand I’ve ever stepped on and these impressive castles were everywhere. Besides that the water was warm but not clear, and the scenery was mostly huge cranes and the site of a port. Not the most picturesque beach.

The market was awesome with all the food and the building was couple hundred years old. 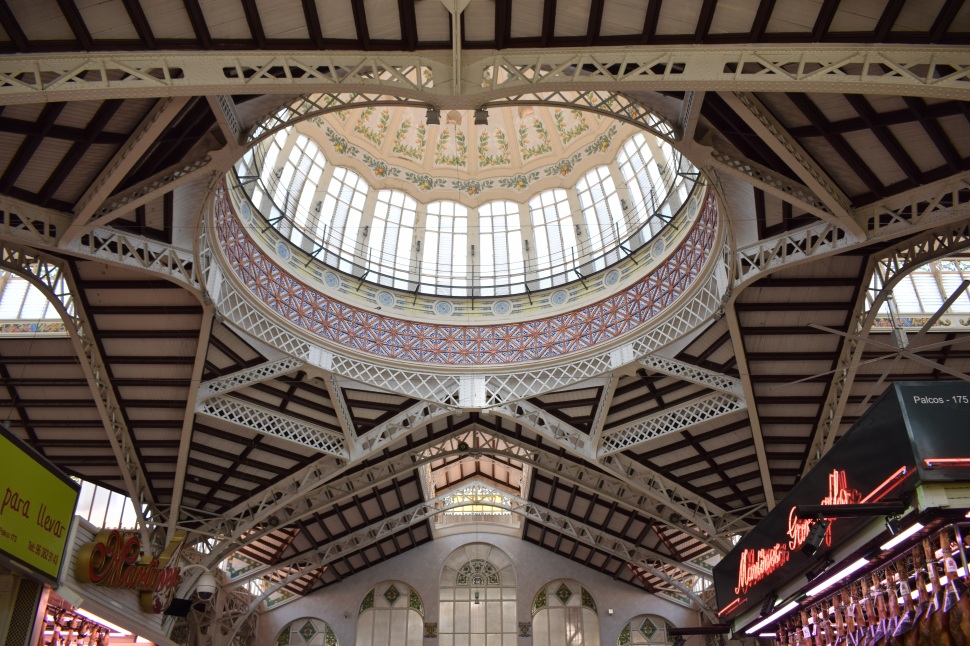 (Rabbit in the paella is very popular)

Plenty to choose from…….

I found valencia to be a very nice, clean town, with plenty to do for young and old. I continue to scout places out and asking myself if  I could live there.  The answer is yes, but I’ve also said that about a lot of places I’ve visited.

At this point I’m hitting a groove in Spain. The people, the food are outstanding and all I here is that I’m going to love granada. The sounds of music food and history are in front of me. It’s hot here in spain in the 100’s and I’m heading inland where it’s hotter so I thought nothing better then a video to help you feel the groove I felt in Granada.

What the video won’t show are the smaller moments of meeting people in tapas bars including a mother and daughter from the bay area. The daughter Roxanne studies at the Academy of art University and the mom Griselda is looking over there vacation place in granada. They live in the south bay. Ironically we have Brisbane in common, my aunt lives there and Griseldas other daughter works for a real estate company there. It is a small world.

In enjoyed hanging out and hearing stories from a retired Paratrooper. His wife and him were traveling around the world using the military planes flights. Its one of the perks of being able to retire as military personnel. He had me laughing most of the night.

There is a relaxed atmosphere and a seemingly care free attitude. The tapas are free by the way as long you drink! Sounded like a deal to me :).

Granada is famous for it’s free tapas and flamenco dancing. The siesta is a real thing especially when its a dry 100 degrees out. You wake up get breakfast head back into the flat where it’s cool, go back out for lunch, come back in where its cool, nap, and then head out around 8pm for those tapas. Of course that was my schedule. I could get used to that.

The Sierra Nevadas in Spain have fantastic hikes, with waterfalls and little swimming areas for when its hot. I caught an old man walking his goats up into the hills. He and the goats popped out of nowhere.

Now if I told you that this has all just been an amazing experience, it has, but being on your own and traveling like this there are periods I’d like to be home with my family and friends. It’s part of the challenge I suppose learning how to be independent from the comforts of the familiar. Its also part of the reason I chose to do this, the challenge!

Ralph Waldo Emerson said, “What lies behind us and what lies before us are tiny matters compared to what lies within us.” You’d like to think traveling can take all your worries away, but the truth is whatever problems or issues you  may have they’ll travel with you.

I stayed an extra 2 days in granada, one because I was hot, two because I didn’t want to pack anymore, and 3 there are free Tapas. After I woke up from Granada siesta the urge to get on the road again gave me quick swift kick in the ass. Madrid be ready, I’m coming!